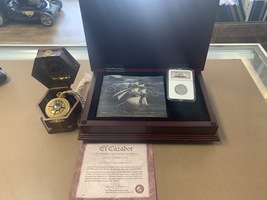 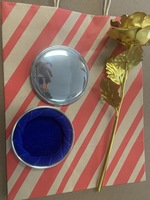 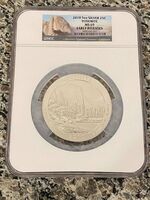 This is a Used Item. So will show some signs of usage .  Very lite wear comes with Display Case and papers.  Quartz watch has new battery and display case (front of watch contains pieces of silver from the shipwreck) Franklin Mint Series.

The pictures are of the exact Coins you will receive.
These 2 Reales coins are larger than a US quarter.They were discovered by divers at a 200 + year old Caribbean shipwreck sight.They Are is 90% silver and were struck at the Mexico city mint. by order of King Charles III between 1772-1783.This type of coin was used as a model for the US coins.Today a U.S. 25 cent coin is still occasionally called "2-bits".The 2 Reales is rarer than the 8 Reales.

France, Spain and England ventured on long voyages to expand their empires from the 1600's to the 1800’s and established colonies outside of their homelands. One of the ways to keep the new colony under control for the mother country was to command its currency. Usually the monarch or some other symbol of power from the initial country would be minted on these coins. The coins would also bear symbols and other devices that would tie the coin to that colony. The money would have some kind of fixed exchange rate with the mother country. Another way to keep the colony in line was to make the currency worth less than

This is a Used Item. So will show some signs of usage .  Very lite wear . Velvet lining in Great shape. Not Engraved.

1980s Tiffany and Co. Round Jewelry Box in high polish Pewter with Blue velvet liner. The high polish lid features a fine dot detail-embellished edge. The inside of the case is lined with royal blue velvet. This handcrafted Jewelry Case measures 8 centimeters / 3.14 inches across. It bears the Tiffany and Co. hallmark. It is also hallmarked Handcrafted Pewter. This beautiful jewelry case looks lovely on a dressing table or vanity. It is a perfect place for rings, necklaces, bracelets, brooches or anything else you wish to store in it.